Brooklyn’s buzziest new restaurant does not come without a vetting of top shelf restaurant street cred. Chef Greg Braxton is an alum of Alinea, Blue Hill at Stone Barns, Atera and Per Se.   At Olmsted, he has teamed up with farmer, co-owner and friend Ian Rothman (former horticulturist at Atera) to bring a familial, fresh look at what a neighborhood Brooklyn restaurant should look like.

Though you may tire of hearing descriptors like “seasonally driven” or “ingredient focused”, particularly in this Food Network obsessed culture, this isn’t the place to throw in the towel on the concept of farm to table food.  You can’t.  The farm is out back.  The attraction to knowing where your food comes from is more than superficial at Olmsted.  It has depth, integrity.  It has style.

Olmsted’s name is derived from Frederick Olmsted, the architect behind Prospect Park.  It’s only right that the back garden, which boasts fresh herbs, vegetables and even chickens, is reminiscent not only of the park, but in the individualist spirit of Brooklyn itself.

But enough romanticizing.  Here’s what we ate:

Cocktails are named for their primary herbal ingredient.  This is straightforward for some drinks, like the Rosemary mezcal with Aperol, lemon, and a black slat rim that I ordered, but less forthcoming for others, such as the Nasturtium, which I had to have explained to me very delicately, with emphasis placed on the fact that it was basically a herbaceous gin martini.  Semantics aside, the cocktails were spectacular, an excellent precursor to what would follow.

Cloudlike puffs of pretzel are shrouded in thin, thin strips of fatty prosciutto and eclipsed by a Dijon mustard foam.  This play on bacon wrapped bread sticks (or really bacon wrapped anything) will make snack fans swoon.

Art.  This isn’t food, this is art.  This plate was so beautifully constructed that it felt like a travesty to eat.  A bright orange, paper thin crepe that looked like a first grader’s Halloween arts and crafts project (in the most wonderful way) is garnished with thumb shaped carrots and swirled in a creamy puree that made me question if it was really THAT much of a faux pas to lick a plate in public.  Peeking out from the strips of squash and pea shoots were unassuming Little Neck clams, bringing a moody brininess to this cheerful DISH.  I never wanted it to end. 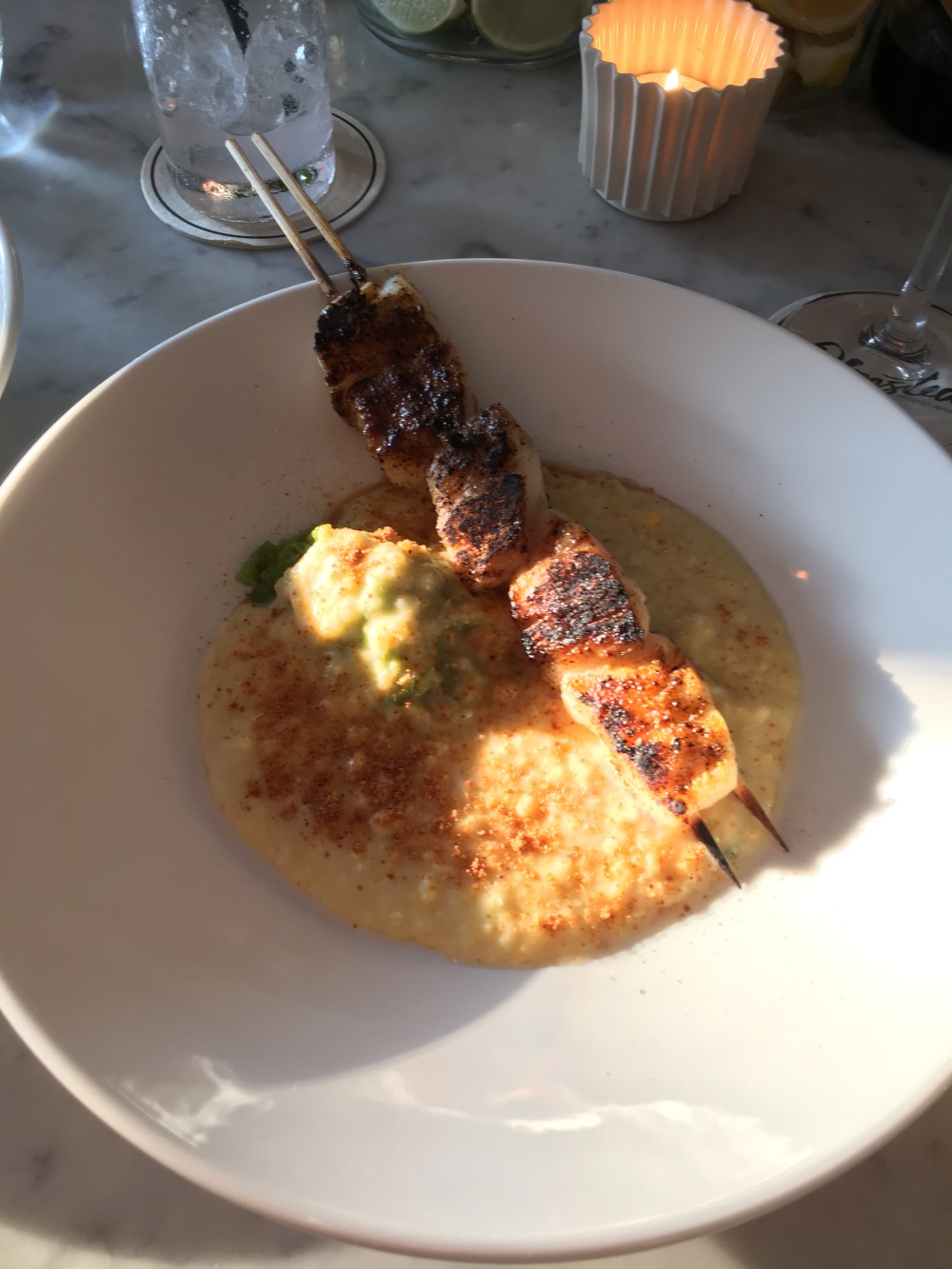 Meaty scallops are lightly grilled and skewered so effectively that it felt like gnawing at a lamb kebab.  Garlicky corn puree so hearty it was more of a chowder rounded out this perfect summer staple in a decadent, New England inspired way.

For those of you who know me, I’m not a real poultry person.  Birds leave me uninspired, unlike their aquatic brethren, duck.  Ducks are the cool uncle of the poultry world, chickens are the lame parents, and a guinea hen is somewhere in between.  The guinea hen was definitely bumped up a few cool notches after my dinner at Olmsted.  Chef Braxton’s bird is in two parts: white meat is sliced in half and stuffed with a pea green ramp jus, and dark meat is confit and tossed in an electric ramp butter.  Even the plating emphasizes the yin/yang contrast of white and dark meat of this bird. 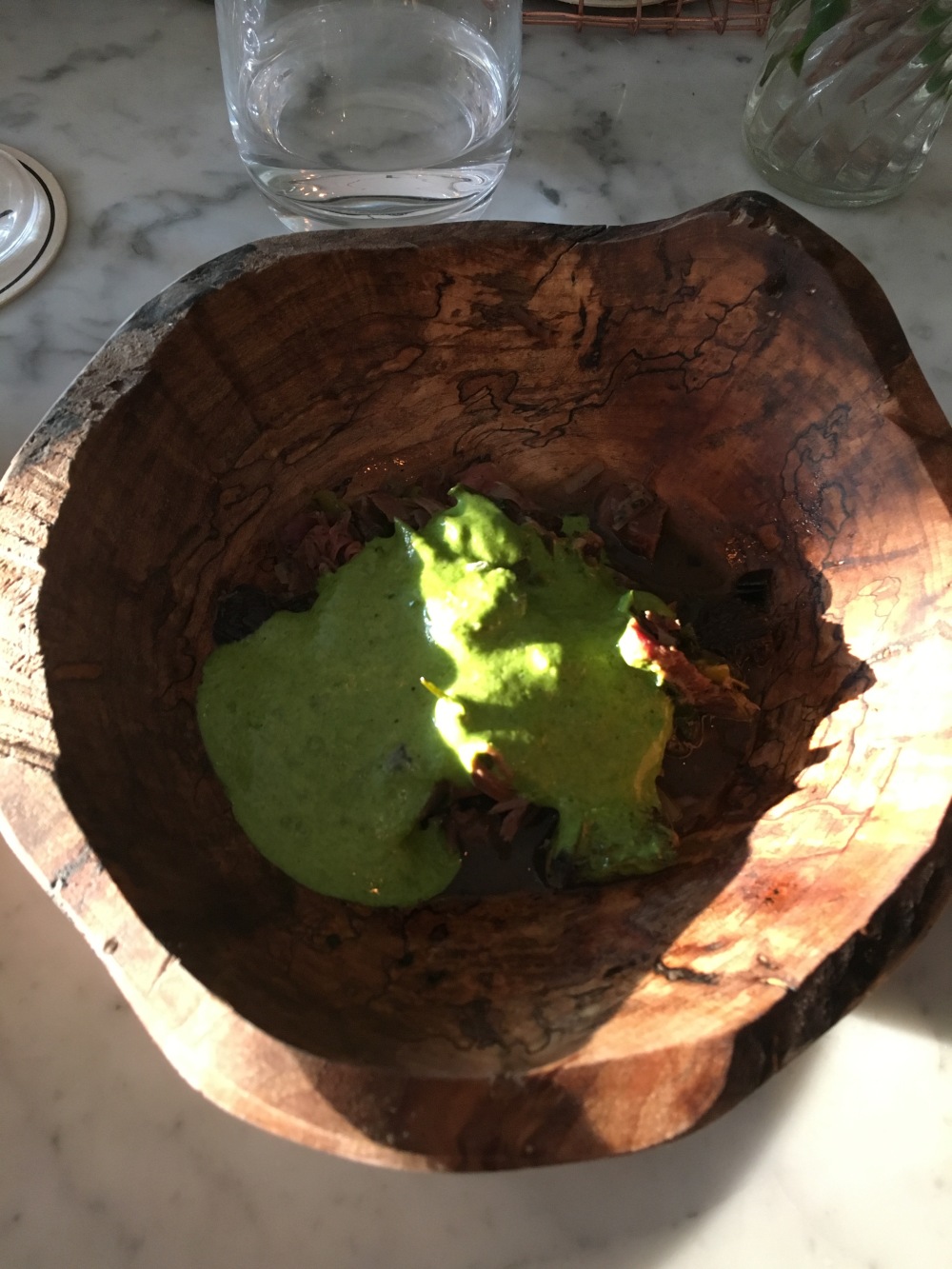 For an affordable yet high end meal, with high end ingredients and expert craftsmanship, technique, and artistry, check out Olmsted.  You won’t be disappointed.