When I think of fondue, I have immediate flashbacks to (several) bad dates in Washington, D.C. when I was fresh out of college.  The Melting Pot was a date night staple for the post collegiate crowd, and I endured several forced social interactions over too many cocktails while dunking hunks of bread into flavorless, sturdy cheese.  I am beyond grateful that my experience at Taureau was not reminiscent of this nostalgic experience in the slightest.  As always, Chef Didier Pawlicki presents a masterful interpretation of a genre of eating that the public may have thought went out of style in the early 90s, but is alive and well and living on Broome Street.

The exposed brick walls and billowing, vintage metal chandeliers that are more art piece than light fixture set the scene for an intimate, cozy evening.  I would be remiss if I did not mention the absolutely killer playlist that made dining at Taureau an absolute blast.  Bob Marley, Led Zeppelin, The Cardigans, The Proclaimers and Blind Melon were all part of a mix I wish I had access to for dinner parties I throw at home.  The music, the food – all of it contributes to the fun atmosphere at Taureau that conjures the perfect image of a chill yet romantic first date, the antithesis of practically all of my previous experience with fondue-filled first dates.

Taureau originally opened in the East Village in 2010, but after two years relocated to a more motif appropriate location.  This menu, 100% of which is fondue and accoutrements, is capable of opening your eyes to so much more than what you’d imagine melted cheese with long, slender metal sticks could be.  All recipes for cheeses, oils, and broths, are original, developed by that clever Frenchman Pawlicki.  An astrology fan as well as a mad genius in the kitchen, Pawlicki has dubbed his restaurant after the astrological sign Taurus in English, Taureau in French.  Taureau is an earth sign, and everything on this menu is from the land, so if you are looking for ocean critters, ease on down the road.

On to why you’re really here:  the food. The pre-fixe menu allows you some wriggle room on how much decadence you want to indulge in at different price points, and comes with all the fixings, but how often do you go out for fondue? Get the Full Village pre-fixe for the premiere options – it’s worth it.

Though I’ve noted how great a date spot this would be, I also fully support coming with a group for a Saturday night dinner or a special occasion – the more people you have, the more options you can order.  Here were my favorites in each category:

Though you can smell the nutmeg before this one hits the table, the Swiss cheese accented with garlic and nutmeg was an interesting and daring intermission in between bites of the Perigord.  I thoroughly enjoyed it.

Not as flashy as the other two, this is the sensible older sister of fondue cheese.  She has her 401k in place and only like $100 in credit card debt.  Thankfully she has a good sense of humor, because her responsible side is jazzed up by her unwavering ability to deliver what you came here for – banging melted cheese.

What, you thought we were done?  Hell no. I had to slap my own hand away to prevent myself from filling up on too much cheese (hint, there IS such a thing as too much cheese) in order to save room for the meat snacks, but I am SO glad I did.  I got to sample a smattering of meats (pork, chicken, hangar steak and filet mignon) and I have to say that the traditional French way is the best way.  Go red meat or go home.

There is a reason why some of the best French fries around are fried in this stuff, and that is because it brings something to the table that vegetable oil and olive oil can’t compete with.  Dipping filet mignon into a sizzling pool of peanut oil was one of the best decisions I made all night.

Sometimes the simplest answer is the right answer.  This is especially true of this vegetable broth, which went perfectly with every single item on the table.  I considered this a palette cleanser in between some of the richer oils and broths, and I was thankful it was in the mix. 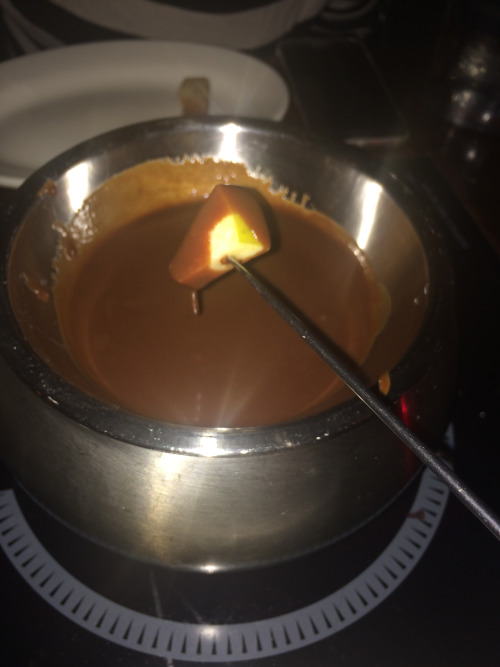 Nothing more picture-esque then a giant pot of melted chocolate.  Dark, Milk or white – you can’t go wrong with the essence of chocolat.