I’ll admit it: I’m a Changophile.  Whole heartedly obsessed with David Chang’s restaurants, his Instagram feed, and his empire, my expectations for the latest addition to the Momofuku family were set impossibly high.  So it’s only fair that I wasn’t completely blown away – it was self-sabotage.

This by no means implies that Nishi should be glossed over.  It was a fantastic meal, and my first in a New York restaurant where tipping has been eradicated.  I found this made a negligible impact on the pricing, since the cost of each individual menu item was higher than it (most likely) would be if tipping was still necessary.  The overall final cost per couple was $130, something totally expected given the amount of food/booze consumed.

While the food was excellent, the space itself resembled something closer to a quick serve spot reminiscent of Momofuku Noodle Bar than a sit down meal.  When we asked our server questions about the sizing of each dish, or how much we should order, or if we needed ingredients explained, our server was so outright condescending that it was a great thing for him that Nishi doesn’t have a tipping policy. I remember waiting tables on Saturday nights, knowing the crowd would be different from a Tuesday, but I was never rude.  If a guest is spending money in your restaurant, it shouldn’t matter if they live in Jersey or the West Village, they’re entitled to the same experience.

My experience here was ultimately off putting because of factors that had nothing to do with the food, which is a travesty since that’s the whole purpose of going out to dinner.  The uncomfortable, backless stools, the brusque service, and the high volume in such a tiny space allowed a dinner I’d been looking forward to for weeks to fall flat.  I’m just thankful those noodles lived up to the hype.

The culinary world falls into two categories: those who eat outside their comfort zone, and those who don’t.  I’ve accepted the fact that I will never be a person who enjoys sucking the heads of crustaceans, but I’m willing to try everything once (especially if it’s fried).  That said, I wasn’t totally put off by these crunchy critters, but they also weren’t anything I’d order again.

“Tiger’s milk?  What the heck is that?” you might be asking yourself.  You’re not alone. Whatever preconception you may have about what ‘Tiger’s milk’ is, I definitively did not imagine it to be green.  Scallop crudo floated on top of this electric green liquid so delicately it resembled Monet’s water lilies.  It could have been potentially radioactive and I still would have sopped it up with a slice of bread, that’s how tasty it was. 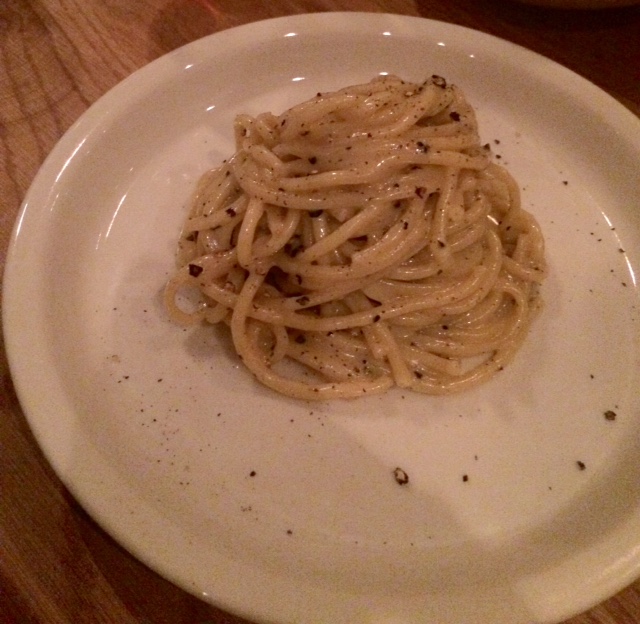 Let’s be real, this is why you’re here.   You waited two hours, can barely hear yourself think, and are being treated like you know nothing about food, but this makes it all worth it.  Chang’s chickpea “hozun” is an umami bomb proving that fact that this classically cheesy pasta doesn’t have cheese is not only mind blowing, it’s downright magical.

This was a very cool take on Spaghetti Vongole.  Tiny, thread like noodles are smothered in sauce and paired with a generous heap of clams.

This dish probably had a more official name, but it is no longer listed on the internet, which is a shame because it had just the right combination of flavors.  Spicy and rich, the Bolognese inspired aspects here didn’t go unnoticed, and the pappardelle was perfectly al dente.

To finish things off, we each had a deliciously refreshing amaro affogato slushie, but not before our waiter explained, in excruciating detail, exactly what “amaro” is.  Le sigh.